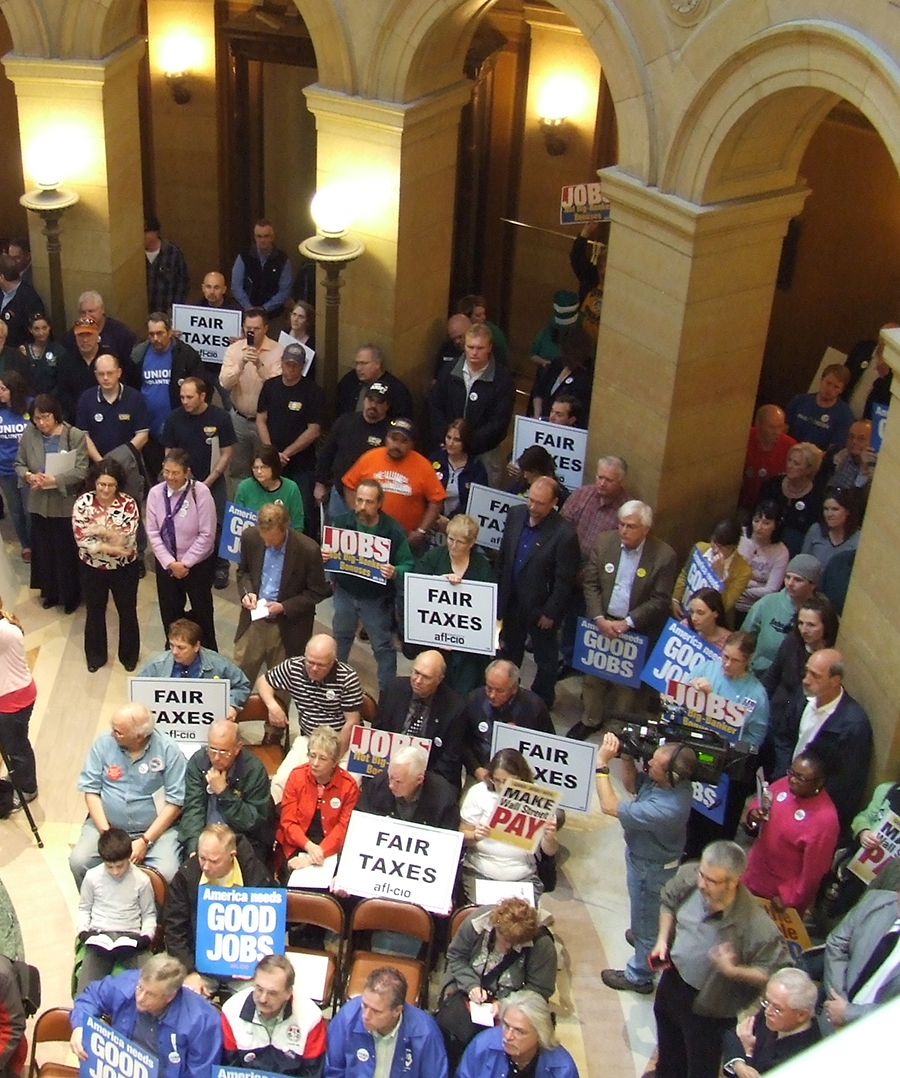 Legislators should act cautiously in the 2016 legislative session and keep revenues strong to continue improving Minnesota’s economy. We will work to ensure progressive and adequate revenues remain the goal in tax decisions. Cutting taxes risks our ability to continue funding our priorities and is an ineffective way to grow Minnesota’s economy. It would make the next economic downturn even harder to recover from.

Minnesota cannot grow and attract good jobs when our infrastructure is wearing out and transit options are woefully inadequate. Too many of our roads and bridges have exceeded their lifespans and are in desperate need of repair.

Minnesota’s economic future depends on legislators making smart investments in today’s students and their educators. Priorities for the 2016 session include, but are not limited to:

PAID FAMILY LEAVE FOR ALL MINNESOTANS

Only 13% of Minnesotans have access to paid family leave, meaning workers are often forced to choose between their families and their jobs. This provision would create an insurance program to provide all Minnesota employees with a percentage of their wages for up to 6 weeks so they can afford to take time off to bond with a new child, care for an elder or seriously-ill family member, or deal with pregnancy-related health concerns.

As a MN4PFL Coalition partner, we urge the 2016 Legislature to pass legislation creating a paid family leave insurance program that accomplishes the goals of providing financial and economic stability for workers by: expanding Paid Family & Medical Leave (PFML) access to as many Minnesotans as possible, improve economic competitiveness of businesses by increasing workforce attachment, and creating an efficient PFML system that maximizes benefits and reduces burdens to workers and employers.

The Minnesota AFL-CIO strongly encourages the Legislature to pass a substantial bonding bill to create thousands of good-paying jobs while making critical investments statewide in projects like higher education infrastructure to make buildings more energy efficient and improve education and job training for students, transportation and transit projects that improve and expand access and modes, housing, and other basic infrastructure.

Currently, the trust fund balance is approximately $1.6 billion. There are some who would argue that our trust fund has a “surplus” and we should give the money back to the businesses. However, in the 3rd quarter of 2008, Minnesota had more than $550 million in the Unemployment Trust Fund, but by the 3rd quarter of 2009, the trust fund was already in deficit ($50 million). The Great Recession took a toll on the trust fund to the tune of about $1.8 billion in a single year, and bottomed out with a deficit that exceeded $700 million. We had to borrow from the Federal Government just to pay benefits to our unemployed workers – which led to increased taxes and an additional surcharge on businesses at the worst possible time.

Minnesota’s Unemployment Insurance program is one of the best in the country in delivery of benefits and mechanics of the tax system. Because of the way our UI tax system is structured, the trust fund was able to get out of deficit quickly, ultimately triggering off the additional surcharge and allowing a reduction in overall taxes for businesses. The one-year-“early” reduction passed by the Legislature in 2014 saved businesses more than $800 million.

Underfunded UI systems can have serious consequences for workers. Several states with depleted trust funds have responded by cutting back either the duration or the amount of benefits available to workers, or both. Although the labor market is fairly strong right now, a growing number of economists are predicting that a downturn could come soon. The Minnesota AFL-CIO opposes any attempts to “spend down” the UI trust fund which could jeopardize a critical safety net for unemployed workers.

Thousands of Iron Range miners have been laid off, and another 700 more Minnesotans who work for vendors that support the mining industry have also lost their jobs. Foreign steel dumping has pushed ore prices to a 10- year low and devastated more than half the 11 mining operations on the Range. Keetac, and its hundreds of workers, has been idled indefinitely by U.S. Steel. The Mesabi Nugget iron plant near Hoyt Lakes and the Mining Resources iron concentrate plant near Chisholm will close for at least two years. Grand Rapids-based Magnetation, facing bankruptcy, idled plants in Bovey and Chisholm. United Taconite closed its mining operation in Eveleth and its pellet plant in Forbes. Northshore Mining in Silver Bay shut down in December, throwing 540 more people out of work.

The Minnesota AFL-CIO strongly supports legislation extending unemployment benefits for these workers and their families and providing desperately needed relief to these communities where mining has been the bedrock of the economy. By the time lawmakers return to work in March, almost 600 steelworkers will have run through their benefits already.

The Minnesota AFL-CIO will continue to support all issues that work toward addressing income inequality, economic opportunity, and tax fairness, as well as legislation championed by our affiliated unions.