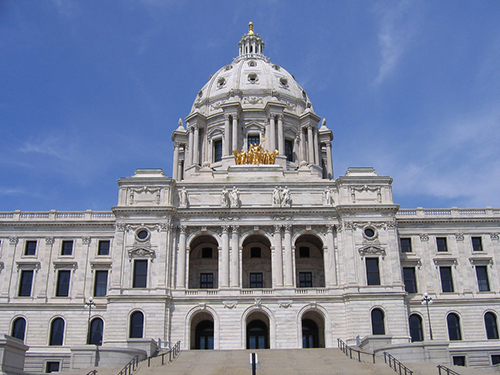 Much work remains for 2020 and beyond

The Minnesota Legislature’s 2019 work came to a close on Saturday morning with significant gains for working people but much work remaining when lawmakers return next February.

“Despite being one of only two states with divided government, the 2019 legislative session yielded big wins for working Minnesotans, including the strongest law in the nation to combat wage theft,” said Minnesota AFL-CIO President Bill McCarthy. “We applaud Governor Walz and the House majority for putting working people at the center of their legislative priorities this year.”

Major portions of the Minnesota AFL-CIO’s Legislative Agenda of Dignity, Justice, & Freedom for Working Minnesotans are headed to the Governor’s desk, including:

Additional Minnesota AFL-CIO supported measures made it through this year including funding and ratification for the new two-year contract covering over 25,000 home care workers represented by SEIU Healthcare Minnesota.

The Legislature’s work isn’t over, however, with Minnesota AFL-CIO priorities such as new revenue to fix our roads and bridges, paid family & medical leave, OneCare public health insurance, and the 40-hour work week waiting for the 2020 session. Additional Labor priorities including teacher licensure reform, drivers licenses for all, a two-person train crew requirement, restoring voting rights, protecting Minnesota’s call center workers from outsourcing, and a state Equal Rights Amendment were all met with obstruction in the Republican-controlled Senate.

“It’s unfortunate the Senate Republicans refused to even consider these critical needs,” McCarthy added. “These issues aren’t going away, and union members will continue organizing around these issues in our communities this year and into the 2020 election.”