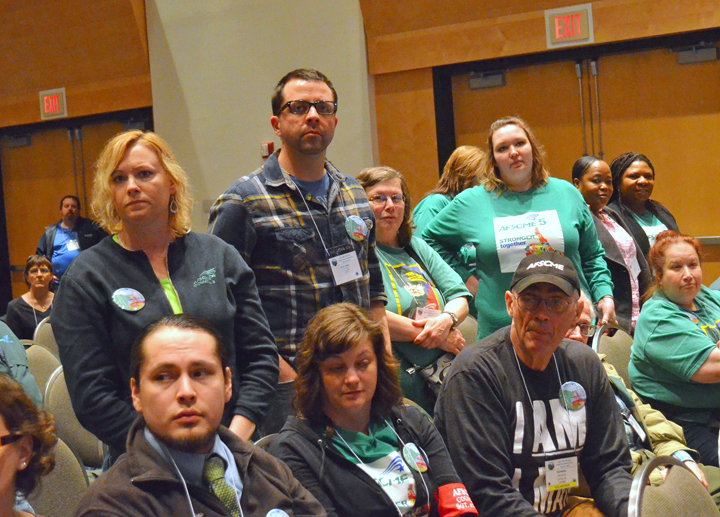 No one knows more about public services in Minnesota than the workers who deliver them, and state lawmakers had access to an abundance of wisdom today during AFSCME Council 5’s annual lobbying blitz.

“The experts in public service are coming to the Capitol,” Council 5 Director Eliot Seide said at the close of a rally at St. Paul’s RiverCentre. “The legislators better get ready.”

Council 5 of the American Federation of State, County and Municipal Employees, which represents 43,000 public-service workers statewide, usually holds its Day on the Hill rally in the Capitol rotunda, but remodeling work has restricted public access to the building this session.

Instead, buses shuttled nearly 1,000 union members from RiverCentre to the Capitol after the rally. In meetings with their representatives, AFSCME members pushed several key priorities, including investments in public services and transportation infrastructure.

DaCruz, a City of St. Paul employee, said that without LGA, communities “would have to lock up parks and libraries and lay off vital police and firefighters. That’s how they do it in Wisconsin.”

Eric Halverson, a member of AFSCME Local 789 from Morris, urged support for a comprehensive, long-term investment in transportation. Too many Republicans at the Capitol, Halverson said, want to “patch potholes with students and seniors,” citing proposals to cut education and human-services funding in order to spend more on transportation.

Jackie Spanjers, a member of Local 1307, said assaults on staff have doubled at her workplace, the Anoka Regional Treatment Center. One such attack left her with a torn rotator cuff and ruptured biceps. Dozens of others in the crowd stood up to indicate having suffered similar experiences on the job.

“Hundreds of us are taking a beating inside the mental-health facilities. We feel like punching bags,” Spanjers said. “But we don’t have to suffer in silence anymore. Our union is organizing online and in workplaces to increase staffing levels and change policies so we can be safer at work.”

Council 5’s show of force at the Capitol puts a human face on the work of public service, Local 1092 member Jessica Langhorst said. And in an era of increased attacks on workers – especially public-sector workers – that’s more critical than ever.

“Public workers are not the culprits,” Langhorst said. “We live here. We pay taxes here. We work hard to support our families. We’re not the problem, and we’re not the enemy.”

We’re releasing this episode on April 27, the day before Workers Memorial Day.

Every year on April 28, the unions of the AFL-CIO observe Workers Memorial Day to remember those who have suffered and died on the job and to renew our efforts for safe workplaces. That’s what this episode is all about.