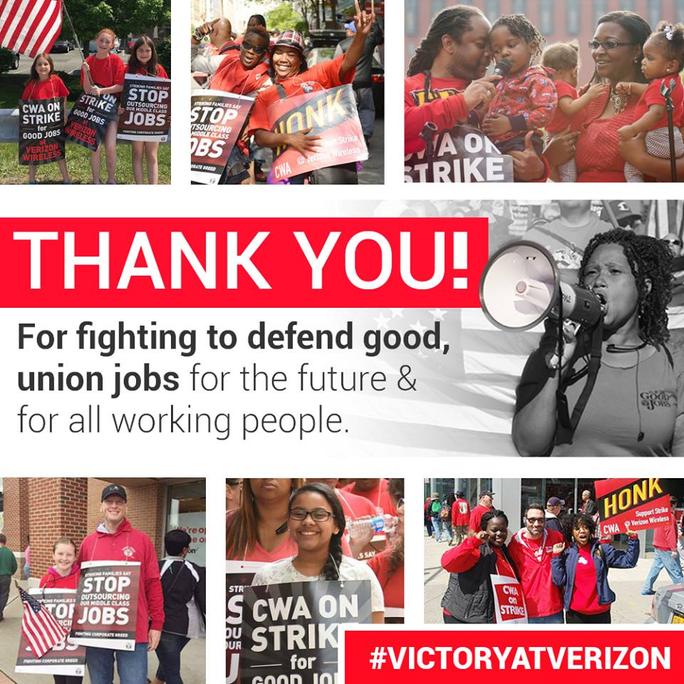 Communications Workers of America (CWA) issued the following statement in response to the agreement reached between striking workers and Verizon last week:

Nearly 40,000 Verizon workers who have been on strike since April 13 are celebrating big gains after reaching a tentative agreement with the company. After 45 days of the largest strike in recent history, Verizon will add 1,300 new East Coast call center jobs and reverse several other outsourcing initiatives that will create new field technician jobs. The four-year proposed agreement provides 10.9% in raises, a $1,250 signing bonus in the Mid-Atlantic and a $1,000 signing bonus plus a $250 health care reimbursement account in the Northeast, $2,800 minimum in profit sharing, pension increases, and a first contract for Verizon Wireless retail store employees in Brooklyn, N.Y., and Everett, Mass.

CWA President Chris Shelton explained the importance of the agreement:

CWA appreciates the persistence and dedication of Secretary [of Labor Thomas] Perez, Federal Mediation and Conciliation Service Director Allison Beck and their entire teams. The addition of good new jobs at Verizon is a huge win not just for striking workers, but for our communities and the country as a whole. This contract is a victory for working families across the country and an affirmation of the power of working people. It proves that when we stand together, we can raise up working families, improve our communities and advance the interests of America’s working people.

Because we fought together as a union, my kids will be able to see me at night. We were all so worried about the potential of transfers and more offshoring, but now Verizon is going to bring more jobs back. All American companies should be doing more to keep good jobs in the country.

We secured a contract our members can be proud of. It secures additional good middle-class jobs for our members in the Mid-Atlantic and keeps them in our communities. We were able to push back against a number of company demands and achieve a contract that includes new job growth, specifically 850 call center jobs; returns work to union members; keeps centers from being closed and job security intact; and provides improvements in retirement benefits. I am so proud of the members for standing together and standing up for themselves, our communities, the customers and their families.

Dennis G. Trainor, vice president of CWA District 1, expanded on the role of the workers:

After more than six weeks on the picket line, Verizon workers won an excellent new contract that will protect good jobs and preserve our standard of living. The members’ unity and determination defeated company proposals to outsource and contract out work, and the new agreement will create 1,500 new union jobs up and down the East Coast. Together, we are turning the tide from cutbacks against working people to building a stronger labor movement and strengthening the power of working Americans. And, for the first time in history, Verizon Wireless retail employees in Brooklyn, N.Y., and Everett, Mass., will have a union contract that improves working conditions and gives workers a united voice on the job.

Highlights from the proposed agreement, which will be presented to members for a ratification vote after the return to work, include: