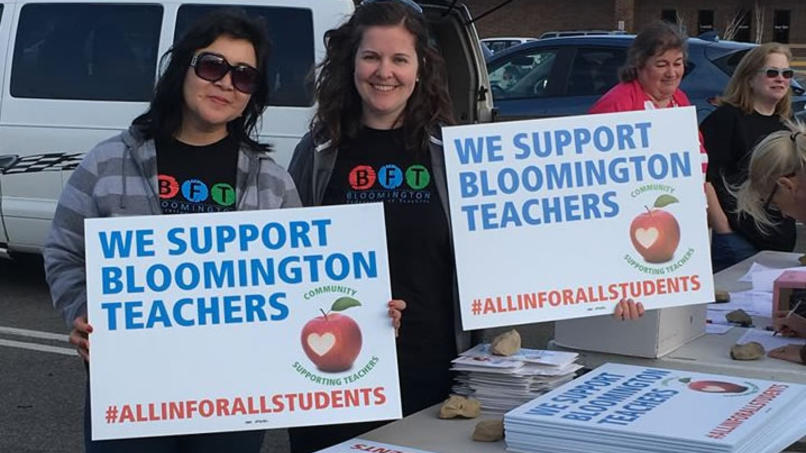 Bloomington teachers are ending the 2015-2016 school year and they’re still without a new contract that should have been in place at the start of the school year.

The school board initially proposed a two-year contract that offered a zero percent wage increase each year to members of the Bloomington Federation of Teachers. And they haven’t moved much above that.

Teachers who haven’t been able to vote on a fair contract proposal may be voting with their feet.

“We’re experiencing an increase of teachers interviewing outside the district,” said Wendy Marczak, president of the nearly 900-member BFT. “There are quite a few teachers who were committed to Bloomington who now are looking elsewhere.”

Teachers have been showing their solidarity by grouping outside their school buildings on Friday mornings and walking in together.

The district and BFT continue to negotiate.

Teachers felt a trust betrayed, however, when the district sent a March 31 letter to Bloomington Public School parents giving a one-sided and inaccurate update on the negotiations, the union said.

“They’ve put out what most people would call propaganda,” said Scott Sieling, a teacher at Jefferson High with 18 years in the district. “They’re not telling the whole truth.”

“This is the first time they’ve done this,” Marczak said. “We felt extremely hurt and upset.”

For a second month in a row, teachers turned out en masse for the May 9 school board meeting. Teachers and school parents spoke during a public comment period, urging a fair contract settlement.

“Two percent is reasonable and should have been a budgeted amount,” said school parent Julie Redlin, who got a standing ovation from the crowd.

Outside in the hall, Tim Kaari, a 4th grade teacher at Ridgeview Elementary with 11 years in the district, expressed his frustration with the board’s wage offers. “Why do we always have the same situation where we can’t afford the number one resource, which is teachers?”

If a settlement is reached over the summer, BFT president dMarczak said, a vote by BFT members wouldn’t be scheduled until this coming fall.

For more information, visit “Friends of Bloomington Educators” on facebook.