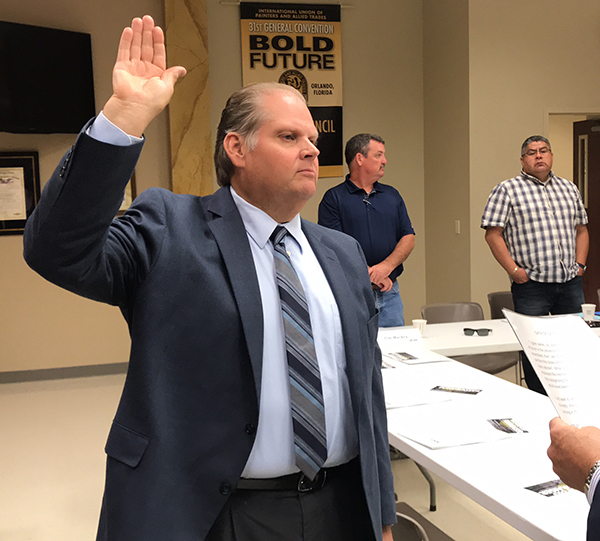 The Minnesota AFL-CIO General Board unanimously elected Brad Lehto to serve as the labor federation’s Secretary-Treasurer. Lehto, a member of the International Association of Machinists and Aerospace Workers (IAM) Local Lodge 459, is currently Chief of Staff/Legislative Director for the Minnesota AFL-CIO and has served in a variety of roles for the state federation for the last 18 years. Lehto succeeds Julie Blaha, who is now the Labor-endorsed candidate for State Auditor, in the state labor movement’s number two position.

“Growing up on the Iron Range, I learned at an early age how important it is for working people to have the freedom to join together in union to negotiate a fair return on their work,” said Lehto. “I am honored and excited to continue advocating for working Minnesotans and their families in this new role.”

During his time at the Minnesota AFL-CIO, Lehto worked with all unions – public and private sector, building trades, service, and industrial – along faith groups and non-profit organizations to protect and improve the lives of working people. Lehto’s work was critical to countless pieces of legislation to expand worker’s freedom to negotiate for a fair return on their work, raise the state’s minimum wage, protect and increase education funding, protect union members’ licensing standards, protect services for dislocated workers, improve infrastructure via substantial bonding bills, create extended unemployment benefits for hard hit industries and areas of the state, and increase benefits for injured workers.

“Brad Lehto is one of the most knowledgeable and respected members of our state’s union movement both inside the Capitol and across Minnesota,” said Minnesota AFL-CIO President Bill McCarthy. “Brad’s commitment to working people is unwavering and Minnesota’s union members will be well served with him as our Secretary-Treasurer.”

Before coming to the Minnesota AFL-CIO, Lehto spent 14 years working for the Minnesota House of Representatives, ten of those years as committee staff person for the House Labor-Management Relations Committee and four as a staffer to the State Government Finance Committee. He was born on the Iron Range of Northeastern Minnesota and is a graduate of Augsburg College.