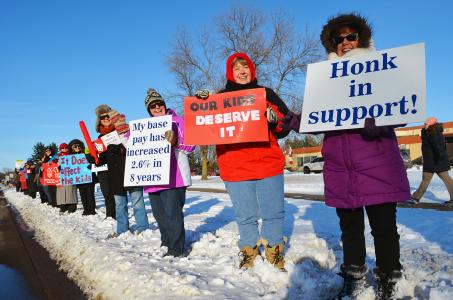 North Branch teachers rallied with supporters on back-to-back days this week, sending a clear message to school board members and administrators before contract negotiations resumed today.

“We’re not in this alone,” industrial tech teacher Irv Geary said. “We’re all in this together. And it’s not just a teacher issue; it’s a community issue.”

Geary, a lead negotiator for the North Branch Education Association and its 200 educator, said talks with the district on a new contract have moved at a glacial pace since teachers’ previous contract expired June 30, 2015.

The union’s bargaining team met three times with school board members before November, union Co-President Stacy Johnstone said. The board then requested assistance from a state mediator, who facilitated one meeting in December and scheduled another for today.

“Teachers deserve a respectful process and a timely process,” Johnstone said. “Here it’s February, and we’re still trying to come to the table.”

According to a tally provided by Education Minnesota earlier this week, 173 of 356 bargaining units statewide have settled contracts with their school districts, or 48.6 percent.

But Johnstone, a transition-age special education teacher, said dragging out negotiations has become “standard practice” for North Branch administrators in recent years. That takes a toll on teachers’ energy and morale, she warned.

“This is amazing energy,” Johnstone said of the 50-plus people lining the sidewalk outside a North Branch campus, holding signs and waving at vehicles as they passed buy. “But we could be home grading papers and writing lesson plans. We’re just ready to get our full focus back in the classroom.”

Pay is a sticking point in negotiations. Veteran teachers’ salaries have remained virtually stagnant in recent years as the district boosted pay at the lower end of the scale, seeking to recruit younger teachers to the area.

“Our long-term teachers who have committed their whole careers to North Branch are feeling the pinch,” Johnstone said. “We’re really out rallying for them.”

Health benefits are at issue as well, she added: “In our last round of negotiations, we were able to finally get a boost in our health benefits, and now they want to take a part of that away. It’s not sitting well. It’s a little frustrating for our members.”

Cars driving by the informational picket line Wednesday honked their horns in support of teachers, who waved and held signs reading “Respect our teachers” and “My base pay has increased 2.6% in 8 years.”

Paraprofessionals in the district, also members of Education Minnesota, and several members of other unions joined teachers at the rally. Among those represented were the Machinists, Minnesota Nurses Association, Building Trades and St. Paul Regional Labor Federation.

“I think this is the face of North Branch, and they’re out here saying, ‘Hey, we stand with the teachers,’” Geary said. “I think that says a lot.”

A Minnesota firefighter, school custodian and special education teacher said fair treatment on the job and the quality of public services are at stake in a case the U.S. Supreme Court will hear Monday.