In the Face of Janus, AFL-CIO Launches Ad Campaign in Minnesota & Nationwide Calling on Working People to Organize 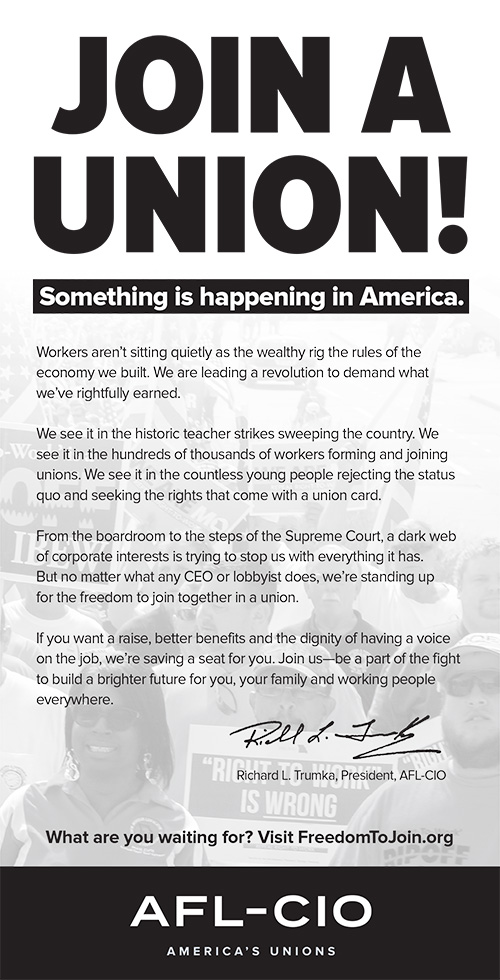 An open letter to working people, penned by AFL-CIO President Richard Trumka, will run in USA Today, the Washington Post and regional newspapers in nine states, including Florida, Illinois, Michigan, Minnesota, Nevada, Ohio, Pennsylvania, Wisconsin and Massachusetts. In Minnesota, the ad will run in the Star Tribune on Wednesday.

Trumka’s letter offers an urgent call to action: “If you want a raise, better benefits and the dignity of having a voice on the job, we’re saving a seat for you. Join us—be a part of the fight to build a brighter future for you, your family and working people everywhere.”

Minnesota AFL-CIO President Bill McCarthy said, “We want working people across Minnesota to know we have the power to rewrite the rules of our rigged economy when we stand together.”

An accompanying digital ad campaign will target workers online and direct them to FreedomToJoin.org, a new website that outlines efforts by wealthy corporate interests to take away the freedoms of working people.

Additionally, the website offers background on Janus v. AFSCME, Council 31, an upcoming Supreme Court case funded by the Koch brothers to deprive teachers, firefighters and other public-sector workers of their freedom to join together. It also offers resources for forming a union and information about ongoing organizing campaigns.

This comes as a wave of collective action has continued to sweep the country. As striking teachers march and secure raises even in anti-labor states, working people from all backgrounds are embracing the power of solidarity. Unions’ approval rating has broken above 60%, while dissatisfaction with corporations has risen to similarly high levels.

Young people, who are disproportionately impacted by corporate-driven policy decisions, have been leading the most recent surge in unionization. Of the 262,000 new union members last year, more than three-quarters were under the age of 35.

This trend has continued steadily into 2018. Last month, nearly 15,000 workers organized unions in a single week, ranging from nurses and flight attendants to Harvard graduate workers.

“From the boardroom to the steps of the Supreme Court, a dark web of corporate interests is trying to stop us with everything it has,” writes Trumka. “But no matter what any CEO or lobbyist does, we’re standing up for the freedom to join together in a union.”