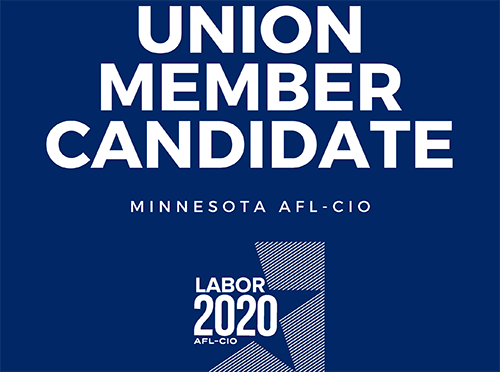 The Minnesota AFL-CIO’s Union Member Candidate Program, based on the New Jersey AFL-CIO’s successful model, seeks to elect member candidates from areas with high union density who will champion pro-worker policies on the state and local level.

“We’re starting off small, but our hope over the long-term is to build a bench of public officials who come directly from the labor movement,” said Minnesota AFL-CIO President Bill McCarthy. “We know that when union members hold public office, they champion our values and work hard to shift the balance of power for working people.”

The state labor federation has designated David Cummings, candidate for Crystal City Council Ward 4, and Sheila Webb, candidate for Robbinsdale City Council Ward 2 as the program’s first members. The candidates, both members of Education Minnesota, took part in trainings earlier this year to strengthen their candidate skills. As part of the Minnesota AFL-CIO’s independent political program, union members will be contacting union voters in their districts to get out the vote on behalf of these candidates.

Going forward, the Minnesota AFL-CIO will learn from this year’s pilot program and plans to recruit a larger cohort of union member candidates for the 2021 municipal elections.

More information on the Union Member Candidate program is available at www.unioncandidates.org.