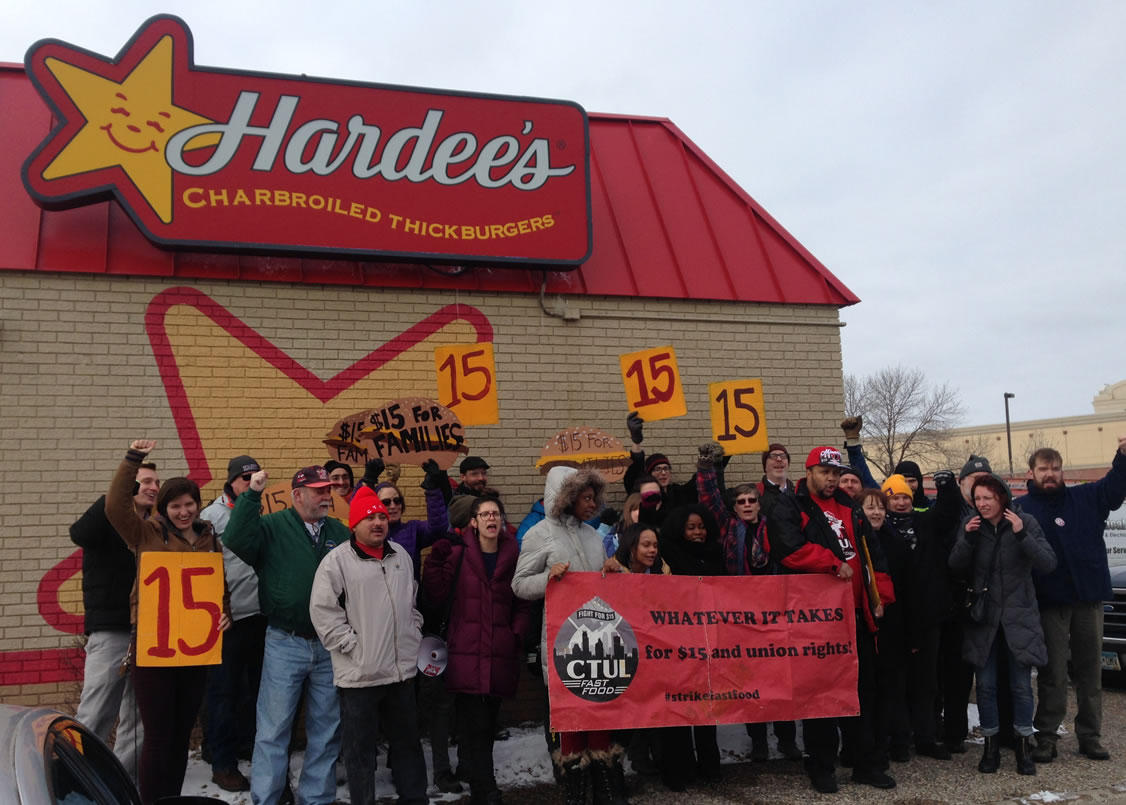 Workers and their allies demonstrated in St. Paul and in cities across the country Thursday to protest the nomination of fast food CEO Andrew Puzder for secretary of the U.S. Department of Labor. They also filed charges against his company, CKE restaurants, alleging wage theft, sexual harassment and retaliation for speaking out.

“He is part of the class that has some of the most violations against working people,” said Elmer Santacruz, an organizer with the Minneapolis-based worker center, CTUL.

He and about 50 others protested Thursday outside a Hardee’s in St. Paul. CKE owns Hardee’s and Carl’s Jr. restaurants. As CEO of the firm, Puzder has opposed increases in the minimum wage and has faced numerous allegations of violating labor law.

According to the company’s financial disclosures, Puzder was paid between $4 million and $10 million in recent years, meaning he makes more in one day than a minimum wage worker earns in a year.

“How can workers be protected and worker rights be upheld with a millionaire as labor secretary?” asked Ginger Jentzen, an organizer for 15Now Minnesota.

Thursday’s filings were the latest in a string of complaints against Puzder and his company. They included four allegations of sexual harassment, which were filed with the Equal Employment Opportunity Commission; 22 complaints of wage and hour violations, which were filed with state departments of labor; and seven unfair labor practices charges, filed with the National Labor Relations Board. They were filed across 10 states, including Alabama, California, Florida, Illinois, Michigan, Nevada, North Carolina, South Carolina, Texas, and Virginia.

“Several months ago my shift-manager asked me for a kiss, and when I said no he told me that unless I started giving him what he wanted, he was going to start taking it,” said Ceatana Cardona, one of the Hardee’s workers involved in the complaints from Tampa, Fla., in a statement. But she said the company did nothing when she complained.

This article includes reporting from ThinkProgress.org