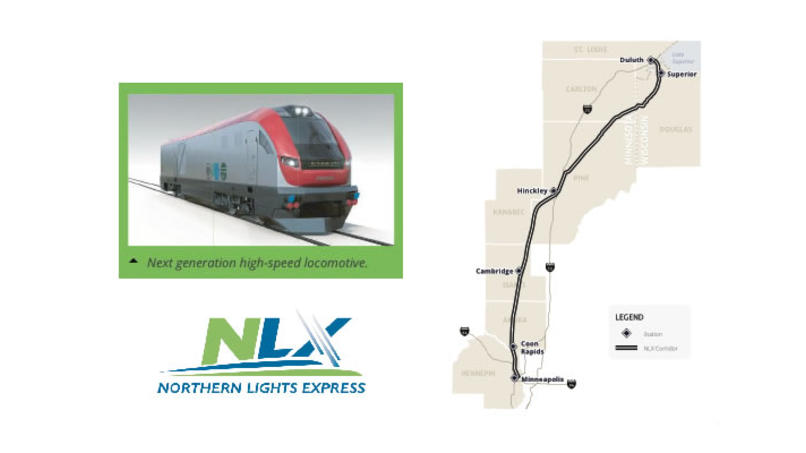 A small investment by state lawmakers today could move passenger rail between the Twin Cities and Duluth closer to reality – and strengthen Minnesota’s entire transportation system, unions and other supporters say.

Led by the United Transportation Union/SMART and the Brotherhood of Locomotive Engineers and Trainmen/IBT, unions are lining up behind the plan, which would create jobs, help the environment and provide a safe, reliable and enjoyable travel experience.

They are urging lawmakers to act before the 2016 session ends on May 23.

“A considerable portion of the state supports passenger rail,” said Phil Qualy, UTU-SMART Minnesota legislative director, citing a 2015 survey conducted for the union. “Northern Lights Express is part of a comprehensive plan that will help Minnesota attract businesses and keep our state competitive.”

‘Less windshield time’
NLX would run on existing track operated by the Burlington Northern Santa Fe railroad, with four trains per day in each direction, operating up to 90 miles per hour.

The two-and-a-half-hour trip will be in state-of-the-art passenger cars equipped with wireless Internet access and other amenities, including space for business meetings, notes Jill Brown, a consultant on the project. “The train is going to be stress-free and comfortable. Passengers will have productive time instead of windshield time.”

That’s one difference between NLX and the Duluth-Twin Cities North Star line operated by Amtrak from 1978 to 1985, supporters say. Other differences are the higher speed of the new trains, lifestyle changes among groups such as millennials and seniors in favor of public transportation, and the fact that highways such as Interstate 35 have gotten more congested.

Planners estimate that, over 40 years, the NLX will reduce highway fatalities and crashes, saving $165 million; lower carbon dioxide and other harmful emissions, saving $47 million; and save time and improve productivity by avoiding highway congestion, saving $158 million.

The train also is estimated to increase tourism revenue $378 million and create $233 million in tourism-related wages over 40 years. NLX is projected to create $355 million in tax revenue from increased economic activity.

Immediate benefits
The first economic boost will be in construction, with 3,100 jobs created annually to install or extend track sidings and build stations and layover and maintenance facilities. Many skilled tradespeople, including heavy equipment operators, will be needed, said Qualy.

The project can move quickly because it already has the approval of BNSF, which owns the track, said Shawn Monahan, legislative representative for UTU-SMART Local 911.

The preliminary estimate of the total cost to implement NLX is between $500 million and $600 million. Once launched, it will cost $17.5 million per year on average to operate, with nearly $13 million of that covered by revenue from fares.

Proponents are quick to point out that NLX is not light rail or commuter rail – it is a railroad. That’s meaningful not only from an operating standpoint, but in terms of funding.

So a $4 million investment in engineering will leverage considerably more money, proponents are telling lawmakers – while preparing the NLX to begin service on Jan. 1, 2020.

No time to lose
The NLX and other passenger lines under consideration – such as high-speed service between the Twin Cities and Chicago – fit within the 2010 Comprehensive Statewide Freight and Passenger Rail Plan developed by the state Department of Transportation. It states that “Minnesota should develop a robust intrastate and interstate intercity passenger rail system which results in improved travel options, costs and speeds for Minnesota and interstate travelers.”

Other states are already there, said Qualy. Illinois, Missouri and Texas are among the states moving ahead with passenger lines between major cities.

“If you look at the national rail network, Minnesota is falling behind the rest of the nation,” he said. “Very clearly, if we fail to plan for rail in our future, we’re going to lose out to other areas of the country on these opportunities for economic development and improved quality of life.”