At Legislative break, House acts for workers while Senate stalls 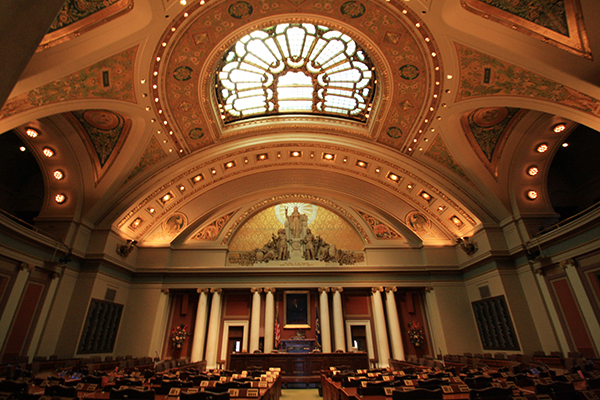 This week marks the Minnesota Legislature’s traditional Easter/Passover recess. In January, we announced our legislative priorities, which represents the Labor Movement’s shared state policy vision and our commitment to racial and economic justice.
Our priorities of crisis relief, maintaining and expanding workplace rights and safety, extending paid leave for all workers, tax justice, and creating jobs & infrastructure have been gaining steam in the DFL-controlled House while languishing in the Republican-controlled Senate. Here’s where the priorities stand at the recess:
Crisis Relief
The Minnesota House is moving legislation through committee to provide emergency paid leave (including back pay) for workers who miss work due to COVID-19 exposure while the Senate Labor Committee has not given it a hearing. The House is also moving on aid to rebuild neighborhoods impacted by civil unrest. Changes in unemployment insurance also continue to move, with both chambers moving forward on making high school age workers eligible for benefits while to House is also advancing legislation to make school employees eligible.
Workplace Safety and Labor Rights
The difference between the House and Senate is even clearer when it comes to workplace rights and safety. The House is advancing bills to give hospitality workers the right to be rehired when businesses open up, codifying the Governor’s mask mandate to protect workers, increasing safety and training requirements for oil refinery contractors, and increased safety for meatpacking workers. While the GOP Senate hasn’t heard any of these bills in committees, they have moved forward on weakening labor standards, gutting our nation-leading wage theft law, and reopening the state without any public health protections.
Paid Leave
Just last week, the House passed legislation providing earned sick and safe time for all Minnesota workers. The House has also continued to move a Paid Family & Medical Leave bill through multiple committees. While the Governor has also proposed both of these programs in his budget recommendations, the Senate has not taken any action on these bills.
Tax Justice
In his supplemental budget, Governor Walz is proposing a new income tax bracket for the highest richest earners, a 1% tax on corporate profits, a tax on excessive capital gains, and taxing foreign corporate income. While the House is considering a number of proposals that would make taxes fairer for working people, the Senate has yet to hold a single hearing.
Jobs and Infrastructure
Governor Walz has proposed a half a billion dollars in jobs and local infrastructure projects to help workers and give our economy a shot in the arm. We are hopeful lawmakers will consider these projects this year. The House is also moving legislation to help rebuild areas damaged by civil unrest.
Lawmakers will return next week. Keep an eye on our Twitter and Facebook feeds for the latest updates as we head into session’s final months.