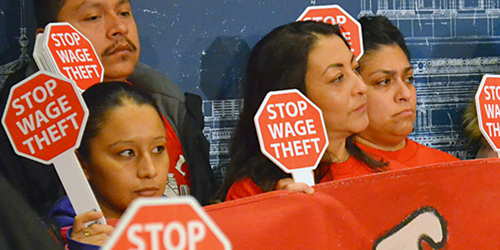 Following the news that a historic bill addressing the wage theft crisis in Minnesota was agreed to as part of the final budget negotiations, the Minnesota Coalition to End Wage Theft released the following statement.

“With the agreement reached this week, Minnesota law will finally say that theft is theft, no matter who you are. Systemic imbalances of power in the workplace lead to the fact that women, people of color, and immigrants are disproportionately impacted by wage theft. Minnesota lawmakers are now addressing the wage theft crisis by passing one of the strongest laws in the nation. As lead House author Rep. Tim Mahoney said, ‘this goes further than any other state’ in addressing wage theft.”

“By making wage theft a criminal felony offense and broadening the state’s power to prosecute, more working Minnesotans will get the justice they deserve. We still have work to do, including getting more resources for the Attorney General to investigate and enforce civil and criminal wage theft, but today we celebrate this historic step forward.”