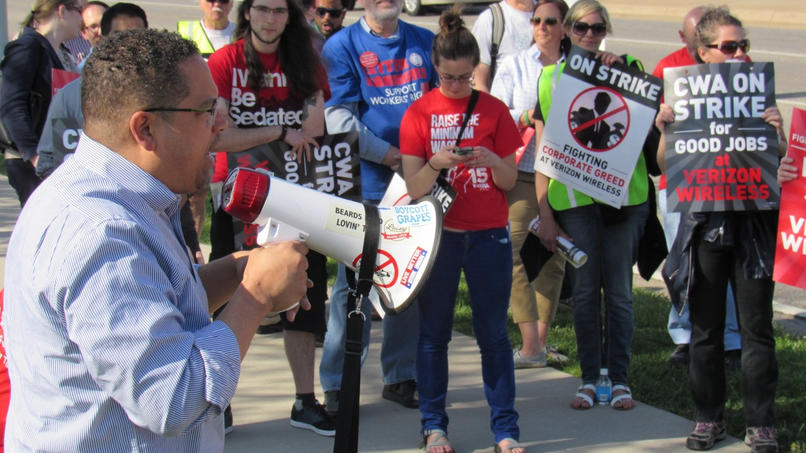 About 50 Twin Cities area union members marched with picket signs outside a Verizon Wireless retail store, showing solidarity with 39,000 Verizon workers who are on strike on the nation’s East Coast.

The local solidarity action was part of a nationwide day of action Thursday to support members of the Communications Workers of America and the International Brotherhood of Electrical Workers, who went strike at Verizon April 13. Verizon cut off the workers’ health benefits May 1.

“We’re here to support our brothers and sisters at Verizon,” said Mona Meyer, president of the CWA Minnesota State Council. “They’re striking because of outsourcing of work — and outstating.”

Under “outstating,” Meyer explained, a Verizon worker on the east coast might be told by the employer, “we need you to go to Texas indefinitely and we can’t tell you when you’re coming home.” Verizon has asked workers to make these moves with almost no advance notice and with no regard to how that would impact workers with children and other family concerns, she reported.

“Nobody wants to go on strike,” Meyer noted, but the workers faced unacceptable contract demands by Verizon, a company which makes more than $1.5 billion a month in profits and whose CEO earns more than $18 million per year, according to a CWA flyer.

“They’re trying to squeeze even more from the people who work every day,” said Fifth District U.S. Congressman Keith Ellison, who spoke to the crowd of picketers.

“Solidarity is the order of the day,” said Ellison, who pointed to members of different unions in the crowd: not just CWA and IBEW but also AFSCME, Machinists, Flight Attendants, and others.

“It can’t just be those workers; It’s got to be us in Minnesota standing with people struggling for decent pay and decent treatment,” Ellison said.

The United States today is seeing the greatest divide in wealth and income since the Great Depression of the 1930s, Ellison noted. “We are pressed to the wall and now is the time to fight back.”

The striking workers on the East Coast include call center workers and technicians and also workers at two unionized Verizon retail stores, which allows CWA and IBEW to mount informational pickets at other Verizon retail locations, Meyer explained.

Consumers on the East Coast, she noted, are respecting the picket lines and Verizon retail stores are becoming empty of shoppers.

With the national day of action, “it’s added pressure nationwide to put on the company so we get them back to the [bargaining] table,” Meyer said.

“The only unionized wireless carrier is AT&T,” Meyer pointed out to the crowd. “I stay at union hotels. I don’t shop at Walmart. I encourage all of you to switch to AT&T.” AT&T wireless also offers a discount to union members.

For more information on the strike, visit this website.