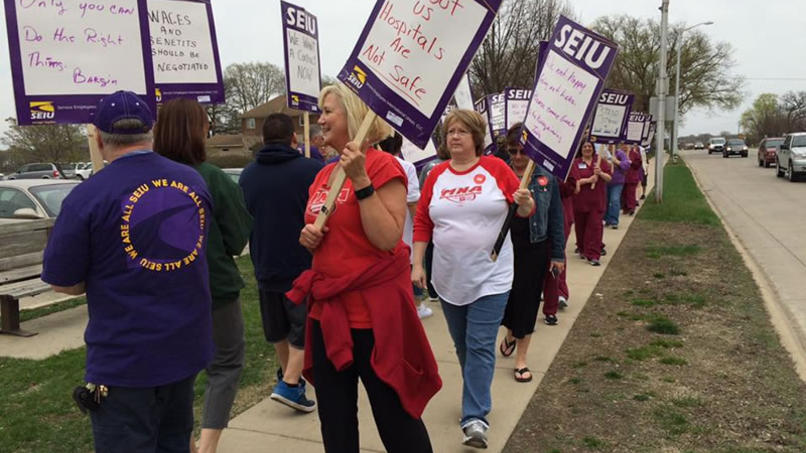 Workers at Mayo Clinic Health System-Albert Lea Hospital held an informational picket to protest management proposals that they say would set back employees, the hospital and the community.

Monday’s picketing was the second at the hospital since bargaining began last August between hospital management and SEIU Healthcare Minnesota. Workers were joined by supporters from the community and from other unions, including the Minnesota Nurses Association, AFSCME Council 65, Albert Lea Education Association, Southeast Area Labor Center and the Minnesota AFL-CIO.

“Like our last picket, we are here today to show that we are willing to fight for what is right for Albert Lea,” said Henry Tews, a maintenance engineer who has worked at the hospital for 26 years.

“Having a safe, well-run hospital is important to patients, and having decent jobs in our community is important to everyone in and around Albert Lea. That is why other hospital employees are out here and have been wearing stickers in support of our fight, because we know that our fight is just the first if we don’t stop them from taking us backwards.”

The maintenance workers at Mayo Clinic Health System Albert Lea Hospital are the first unit of SEIU Healthcare Minnesota members to bargain this round with Mayo, and they have held more than 10 negotiation sessions over the last seven months.  Many points of agreement have been reached, the union said, but workers continued to expressed frustration over proposed language that takes away the voice of longtime workers.

“We’re ready to get a fair contract settled, and we hope Mayo will come to the negotiating table to get that done,” said Gary Wichmann, who has worked at the Albert Lea Hospital for 10 years. “This is too important to back down, and we are prepared to continue this fight as long as is needed for what is right."

Talks have stalled and no new negotiation sessions are planned, the union said.