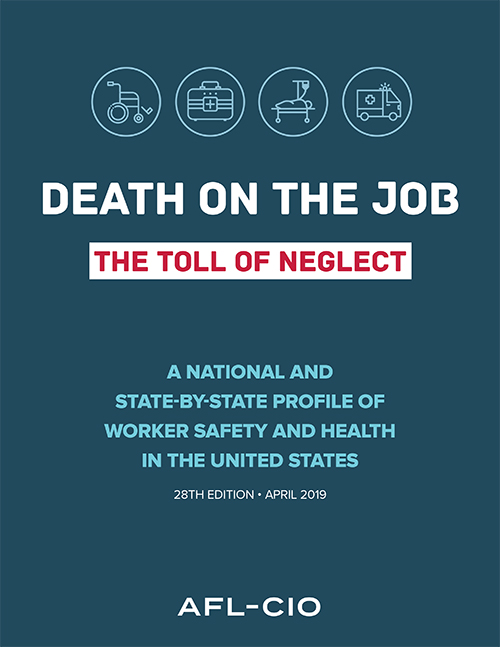 According to a new report released today by the AFL-CIO, Minnesota had the 28th highest rate of workplace deaths in 2017. This analysis, based on data from the Bureau of Labor Statistics, shows that 101 Minnesota workers lost their lives due to on-the-job injuries, resulting in 3.5 deaths per hundred thousand workers.

“This year’s report is yet another reminder of the dangers facing working people in Minnesota every single day,” said Minnesota AFL-CIO President Bill McCarthy. “Working people deserve better. We have a right to a safe workplace and a voice on the job.”

Nationally, 5,147 American workers died on the job in 2017, a small decrease from deaths the previous year. Another estimated 95,000 died from occupational diseases, meaning approximately 275 workers died each day from preventable, hazardous workplace conditions. Overall, the national job fatality rate was 3.5 per 100,000, workers down slightly from 3.6 in 2016.

The report, titled “Death on the Job. The Toll of Neglect” marks the 28th year the AFL-CIO has produced its findings on the state of safety and health protections for workers within the United States. The report shows the highest workplace fatality rates are in Alaska (10.2 per 100,000 workers), North Dakota (10.1), Wyoming (7.7), West Virginia (7.4) and South Dakota (7.3).

Other report highlights show that Latino workers continue to be at increased risk of job death, and that the number of Latino worker deaths increased in 2017 to 903 from 879. Deaths among older workers also increased; workers 65 or older have nearly three times the risk of dying on the job as workers overall. Construction, transportation and agriculture industries remain among the most dangerous. In 2017, 917 construction workers were killed—the highest total of any sector. Agriculture, forestry, fishing and hunting was the most dangerous industry sector, with a fatality rate of 23.0 per 100,000 workers.