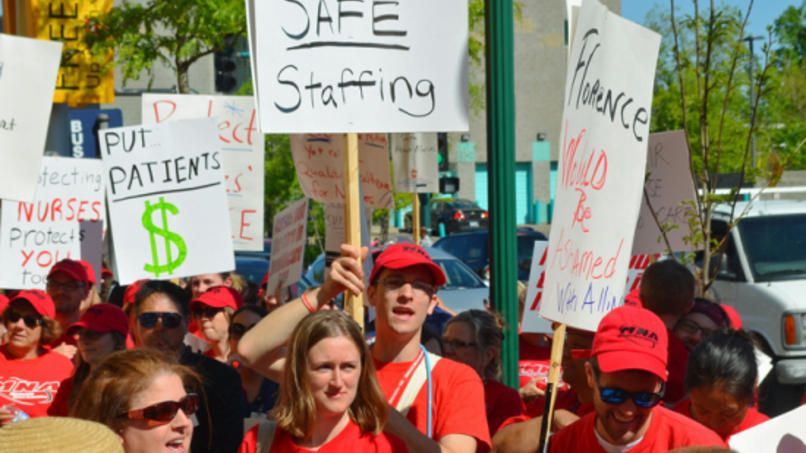 MNA said it has delivered the 10-day Notice of Intent to Strike to Allina Health executives, calling for a walkout starting at 7 a.m., June 19, ending at 7 a.m. June 26. The strike will involve approximately 5,000 nurses at Abbott Northwestern, Phillips Eye Institute, Mercy, United, and Unity.

"We hope this action sends a clear-cut message to Allina what we think of their May 31 offer," said Angela Becchetti, RN at Abbott Northwestern hospital.

Nurses informed the leadership of the five hospitals of MNA's intent to engage in an unfair labor practice strike. Nurses have protested Allina's unwillingness to respond to their proposals on workplace violence and staffing issues as well as provide needed information necessary to counter the employer's proposal to eliminate nurses' affordable health plans.

The contract between MNA and Allina Health expired on May 31, but the employer left the bargaining table last week and refused to talk further about important issues to reach an agreement, the union said. Allina Health negotiators responded with a "complete offer" and told nurses they would not continue to negotiate.

Under the National Labor Relations Act, union members can engage in an unfair labor practice strike without fear of retaliation. The nurses’ employment is protected under federal law.

Nurses at all five hospitals also voted by more than a 66 percent super majority to reject the contract and authorize the negotiating committee to call a strike.