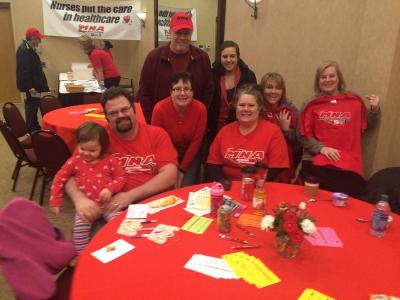 MINNEAPOLIS - Members of the Minnesota Nurses Association rallied in solidarity Saturday as 6,000 registered nurses represented by the MNA enter negotiations with the Allina hospital system.

“We’re all here to support the MNA nurses of Allina,” MNA President Mary Turner told the crowd of more than 300 gathered at the Ramada hotel in Minneapolis for Saturday’s event.

“We’re here to kick off negotiations with Allina hospitals and let our nurses know we are with them every step of the way,” she said.

The room was a sea of red – the MNA’s signature color – as nurses wore red shirts and caps sporting the MNA logo. Participants included nurses from Allina hospitals and from other facilities across the state, the union said.

The facilities covered by the contract with Allina include Abbott Northwestern in Minneapolis, Mercy in Coon Rapids, United in St. Paul and Unity in Fridley.

Twin Cities nurses represented by the Minnesota Nurses Association have reached a tentative agreement on a three-year contract with five of the six hospital systems. Nurses will vote on the settlement Tuesday, Jan. 19.

The MNA negotiations team is recommending nurses ratify the agreement, the union said.

Nurses employed by Allina Health will rally Saturday as they go into contract negotiations.

Other nurses and supporters are expected to participate in the solidarity rally that will run from 11 a.m. to 1 p.m. Saturday, Feb. 6, at the Ramada Plaza, 330 Industrial Boulevard , Minneapolis. The rally is organized by the Minnesota Nurses Association.

"Show your support for Allina nurses, who are in the only metro hospital system to not engage in wage-only negotiations this year," the MNA said in announcing the rally.