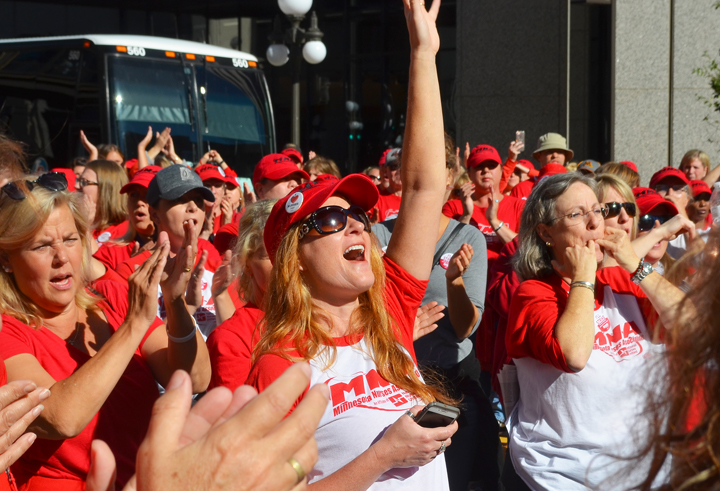 Kuplic, a senior vice president at Securian, refused to meet with a delegation of nurses who entered the high-rise office building at 4th Street and Robert, prompting chants of “Where’s Dave Kuplic?” from hundreds of nurses in the street outside.

An employee in Securian’s public relations department told nurses he would pass their message along to Kuplic, United Hospital nurse Jennifer Michelson said. “But he wanted to know why we felt there was impact on Securian.”

Here’s why. Securian is one of a handful of investmentfirms and corporations, including General Mills and Buffalo Wild Wings, whose executives dominate Allina Health’s not-for-profit board. Striking nurses are hoping public pressure will prompt those board members to reconsider management’s hard-line approach to contract negotiations.

It’s an approach that is costing the not-for-profit health provider tens of millions of dollars each week the nurses are on strike – costs that already have eclipsed the concessions Allina wants from its nurses in contract negotiations. Mercy Hospital mental health nurse Julie Anderson said leaders who would invest in union busting over community care have no place on a charitable board.

“Why do we have all these financial (executives) on a non-profit board of directors?” Anderson asked. “What do they know about health care?”

The nurses originally intended to stage the demonstration outside RiverCentre, where Allina CEO Dr. Penny Wheeler was to join a panel discussion on health care costs. But Wheeler backed out at the last minute, prompting nurses to seek out Kuplic instead.

About 4,700 members of the Minnesota Nurses Association employed at five Allina facilities in the Twin Cities have been on strike since Labor Day, their second strike of 2016. They voted Monday to reject the provider’s most recent contract proposal, saying it did not do enough to contain health insurance costs or address safety-related staffing concerns.

The vote result means the strike will continue indefinitely. Click here for a list of ways to support nurses in their fight for a fair contract.