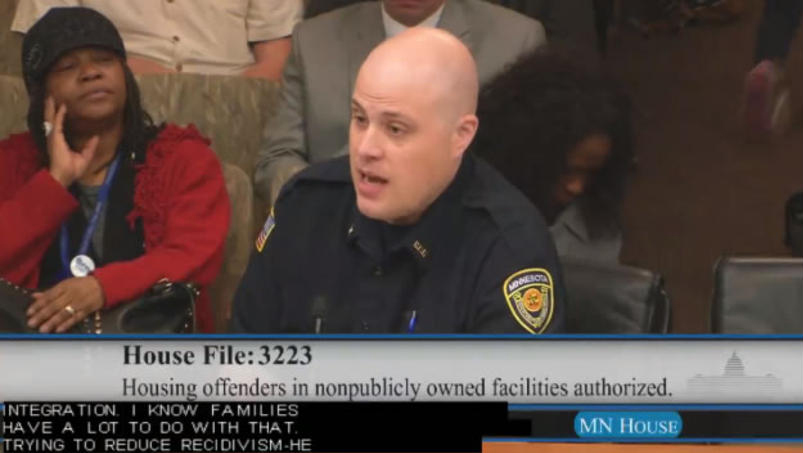 Issues of race, poverty and justice bubbled to the surface in an emotional hearing Tuesday over legislation to re-open a privately run state prison in Appleton, Minn.

After several protesters disrupted the proceedings, the chair of the House Public Safety and Crime Prevention Policy and Finance Committee recessed the meeting to clear the room. In the end, with 10 Republican members voting in favor and 7 DFL members voting against, the committee approved HR3223 and sent it the Ways and Means Committee.

Prairie Correction Facility in Appleton, operated by Corrections Corporation of America, closed in 2010. At one time, it employed more than 350 people and held about 1,600 inmates.

The bill authored by Rep. Tim Miller, R-Prinsburg, would require the state to enter into a contract to lease and operate the facility. Prinsburg said a privately run prison would ease current overcrowding and create much-needed jobs in an economically depressed area of the state.

“Thousands of businesses, most of them mom-and-pop, most of them family-owned, would benefit from this prison opening again,” said Paul Raymo, president of the Appleton Area Chamber of Commerce.

But several groups lined up to oppose the plan, including AFSCME – the union that represents correctional officers, the religious coalition ISAIAH and the community group #BlackLivesMatter. They said more prisons are not the answer and that prisons should not be run by profit-making corporations.

“This isn’t about the people of Appleton,” said the Rev. Brian Herron of Zion Baptist Church. “We face the very same dilemma in north Minneapolis about unemployment.

“Why are we having discussions about building an economy off of black and brown bodies?”

Nekima Levy Pounds, president of the Minneapolis NAACP, said, “I have not heard any discussion about the high unemployment in the inner city communities that are actually fueling the incarceration rate.”

She urged lawmakers to consider other proposals, such as reforms to the probation system.

Levy Pounds and Joe Broge, a corrections officer at Stillwater prison and an AFSCME member, both cited problems at facilities operated by Corrections Corporation of America.

"They have an absolutely abysmal record," said Broge.

Both the NAACP and AFSCME, along with a number of other organizations, including MAPE, the Minnesota AFL-CIO and SEIU, are members of the Minnesota Coalition to Ban Private Prisons.

Broge said a prison in western Minnesota would make it difficult for most prisoners to receive visits from family members. “It’s important that you stay connected to your communities” so that prisoners are able to become productive citizens when they are released, he said.

Some of the most emotional testimony came from people who criticized lawmakers for devoting millions to prisons – but nothing to help people of color who are struggling.

While Appleton faces an 8 percent unemployment rate, the jobless rate for African-Americans in Minnesota is 17 percent, said the Rev. Nazim Fakir, a member of ISAIAH. “Where are the $140 million programs” to help that community? he asked.

Some estimates say the state would spent $140 million over 6 to 10 years to pay for a private prison.

So far, no companion to the House bill has been introduced in the Senate and Governor Dayton’s administration opposes the proposal.

“Prison expansion, a new building, is not on the Department of Corrections plate whatsoever,” he said. “This is the most expensive option that is available.”

Roy said government should not shift its responsibilities in the criminal justice system to private companies.

“The role of government is significant in the criminal justice arena,” he said. “It is a responsibility that I think falls clearly on the role of government. The notion that we incarcerate people for profit, for corporate profit, is, I think, the anti-thesis of America.

Welcome back to Minnesota Works! The Legislature has returned and so have we! In this episode we hear about the proposal to open the Appleton private prison and the efforts to ban private prisons. Our guests are Jennifer Munt, Director of Public Affairs for AFSCME Council 5 and Joe Broge, a Corrections Officer at Stillwater and a member of AFSCME Local 600.