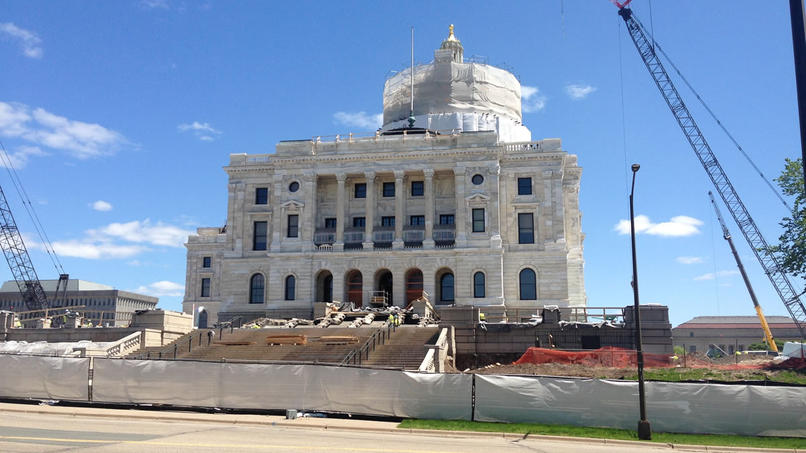 Labor leaders are expressing disappointment that the 2016 Legislature failed to approve either a comprehensive transportation package or bonding for much-needed infrastructure investments.

As Sunday’s midnight deadline to adjourn came —and went — the media offices of the Republican-controlled House and DFL-controlled Senate began sending news releases placing the blame for the impasse on the other chamber.

Governor Mark Dayton, at a Monday news conference, said that the Legislature’s inability to pass a bonding bill and a multi-year transportation bill was “disappointing, to say the least.”

He particularly decried the “political games” that led the House to keep Southwest Light Rail funding out of its down-to-the-last-minute bonding proposal, a move unacceptable to the Senate.

“We are beyond disappointed that once again the legislature failed to send the Governor a comprehensive, long-term funding plan for Minnesota’s road, bridge, and transit infrastructure,” said Glen Johnson, business manager of Operating Engineers Local 49. “For years, our transportation system has been ignored and our state’s potential has been stifled by the lack of political courage to spend the money to fix it.

“Spending money on transportation is an investment in union construction workers all across our state,” Johnson said. “It is unacceptable these workers and their families were not a priority this year. We urge the Legislature to reconvene for a special session, pass a real transportation bill, and put our members to work.”

“We’re very disappointed that a long-term, sustainable bill to fund transportation and transit throughout the state did not get done,” said Kyle Makarios, director of government affairs for the North Central States Regional Council of Carpenters. “We encourage the Governor and legislative leaders to finish the negotiations on that bill and take care of our state’s infrastructure.”

Denise Specht, president of Education Minnesota, said millions of dollars in renovations and repairs are needed at colleges within the Minnesota State Colleges and Universities system.

“When college students walk into a clean, functional space to learn, they see Minnesota values them, and wants them to succeed,” Specht said. “When those same students walk into a musty building with a leaky roof, they learn the state's leaders have other priorities. We can do better than that.”

Harry Melander, president of the Minnesota State Building and Construction Trades Council, said, “We’re hoping everyone takes a breath and figures out what needs to be done to have a bonding bill and transportation bill,” said “We have hope.”

Bill McCarthy, president of the Minnesota AFL-CIO, commented on the broader dynamics of the 2016 session.

Members of SEIU Healthcare Minnesota said the Legislature ignored the needs of thousands of home care workers and their clients by failing to fund overtime pay.

The funding would have helped provide the care needed for thousands of families across the state to stay in their homes, since thousands of workers’ hours were capped at 40 late last year, the workers said. It also was a step needed to bring the state into compliance with federal law, under new Fair Labor Standards Act rules that went into effect in October 2015.

“I’m so disappointed that the Governor and Legislature refused to listen to our voices and allocate the funding needed to support families like mine. Home care workers provide the support I need so I can live an independent life, and the hour cap is making that very difficult if not impossible for me and my family,” said Nikki Villavicencio, a home care client from Maplewood.

“Thousands of additional families are discovering each year the need for quality home care. By neglecting to address this crisis, elected officials have only made things worse. We will continue to advocate for making home care jobs as strong as they can be, so that everyone who wants to stay in their home gets the care they deserve."