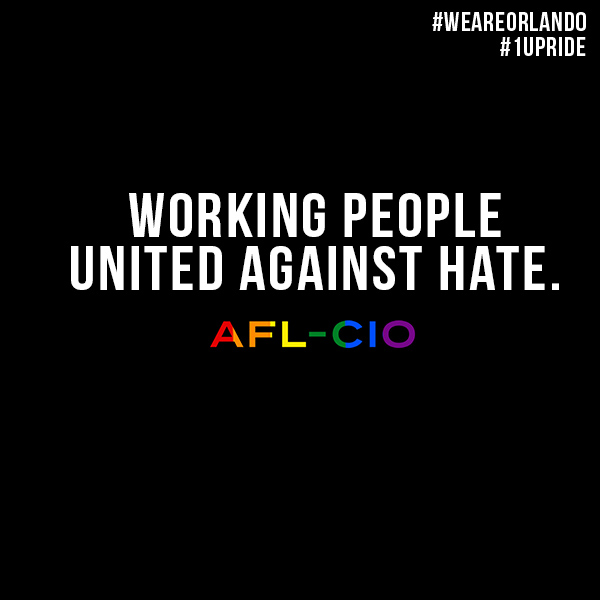 “Bayard Rustin said to be afraid is to behave as if the truth were not true. We in the labor movement are not afraid. We are resolved to do everything in our power to make sure this never happens again. The truth as we know it is both devastating and infuriating. 49 souls were lost in a cowardly act of violence. These are our brothers, sisters and friends. At least one was our member.

“For the LGBTQ community, clubs like Pulse are a space where people can feel safe and be their true selves. Sunday’s horrific act is a reminder of how fragile that safety can be. While we have made undeniable progress toward equality, too many in our country still face derision, discrimination and violence. These flames of hatred have been fanned by those in public life who want to marginalize an entire group of people for political gain. It’s despicable and it must stop.

“But this was more than just an attack on the LGBTQ community. The victims were overwhelmingly young and Latino. Sunday’s massacre was an assault on everything our movement stands for: equality, justice, solidarity and inclusion.

“It was also an extraordinarily difficult situation for our first responders, who had the traumatic job of sorting the dead from the living, effectively working in a war zone. We thank the police, fire and health care providers who saved lives and continue to care for the injured. We will stand with them in the trying days ahead.

“Labor is one big family, made up of people of all races, religions, genders, sexual orientations and gender identities. As a family, we will work to provide comfort to our brothers and sisters in Orlando and across the United States. And we will make it our daily mission to ensure America’s workplaces and union halls are safe and free from bigotry.

“There will be some who try to use this tragedy to further divide us, to pit communities against each other and scapegoat entire faith traditions. Let us be perfectly clear: giving in to division and fear will only add insult to injury. This is a moment for us to come together, embrace our common humanity and take the necessary steps to make our country safer, stronger and more united.”