Strike is over, nurses say 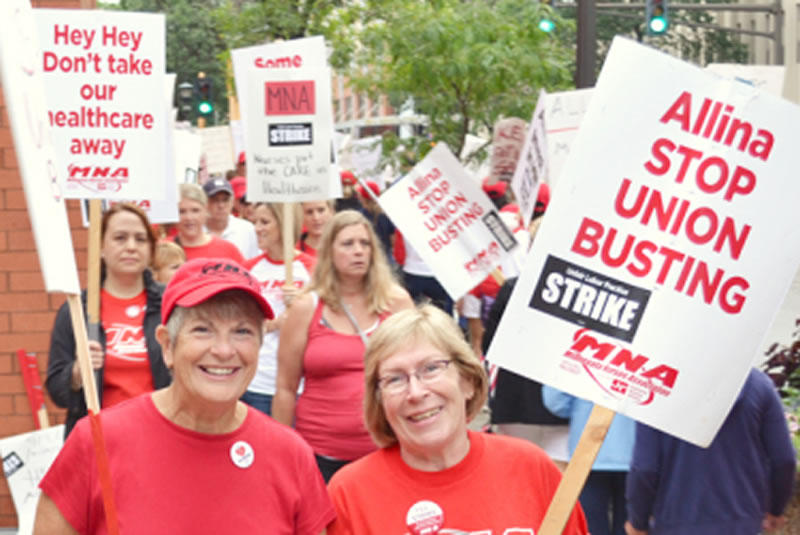 A long struggle for a new contract – marked by a weeklong hospital strike in June and another walkout that began on Labor Day – is over as nurses have ratified an agreement with Allina Health.

A majority of the striking nurses represented by the Minnesota Nurses Association voted in favor of the tentative agreement with Allina Health reached earlier this week, the union said.

Nurses from Abbott Northwestern and Phillips Eye Institute in Minneapolis, United in St. Paul, Mercy in Coon Rapids and Unity in Fridley took part in voting on Thursday. The contract covers about 5,000 registered nurses at the five facilities.

"This contract represents compromise and strength by the nurses," said MNA Executive Director Rose Roach. "While it's nowhere near what nurses deserve, they can hold their heads high. They can rest easy knowing they won a ‘no diminishment’ clause, so even though they are moving to the corporate health insurance plans, they have assurance that the value of their benefits won't be reduced in any future cost-cutting scheme."

Nurses will pull the strike notice and return to their jobs under terms of the return-to-work agreement reached on Tuesday morning, Roach said.

"The nurses sacrificed their livelihoods and their families' security to win improvements to patient care through a staffing procedure that will examine and review the impact of charge nurses having patient assignments," said MNA President and North Memorial Medical Center Registered Nurse Mary Turner.

While they agreed to phase out their preferred, union-sponsored health insurance plans by 2018, nurses extracted a guarantee from Allina that their benefits under the provider’s “core” insurance plan will not diminish through 2021.

Nurses also forced Allina to compensate them in exchange for giving up their preferred insurance plans.

Additionally, the contract calls for wage increases of 2 percent in all three years of the contract, around-the-clock security postings in the hospitals’ emergency rooms and creation of three labor-management bodies to give nurses a greater voice over health insurance benefits, workplace safety and staffing.

Difficult bargaining between Allina and the MNA had been going on since February and “the wounds inflicted on the nurses since February will not heal overnight,” said Roach.

“Nurses are determined to keep speaking up for their patients and their profession as they return to the bedside. I hope Allina will listen and work to re-establish trust with the nurses and ensure maximum patient safety and care."