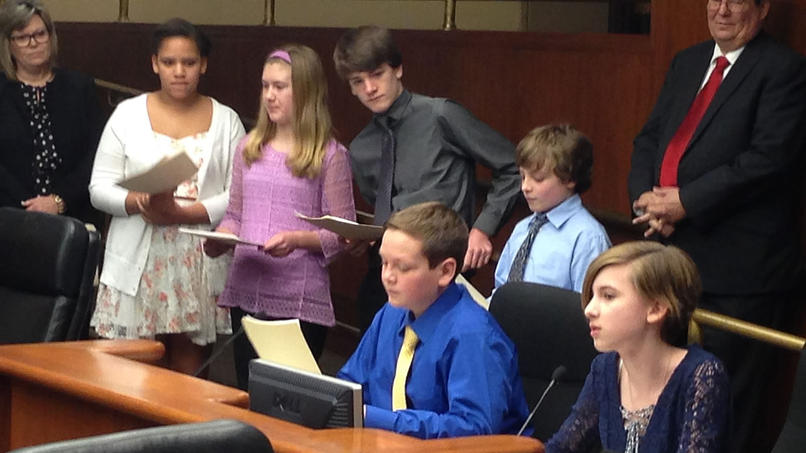 Six Owatonna public school students testified before state lawmakers Thursday, urging them to authorize a memorial plaque recognizing the scores of workers who built the state Capitol – including six who died on the job.

The House Government Operations and Elections Policy Committee unanimously approved legislation after hearing from the students, who collected more than 700 signatures supporting a memorial. They launched their campaign after learning about the Capitol workers through the Who Built Our Capitol? video, website and curriculum, developed by the University of Minnesota Labor Education Service.

As they addressed lawmakers, the students read the names of those who died and described the circumstances of their deaths.

Four of the workers - John Biersack, John Corrigan, Alfred Magnuson and Florian Zauner – fell to their deaths. Felix Arthur was working on a stone polishing machine when he got caught in the flywheel and was nearly cut in half. Albert Swanson died after a passing wagon dislodged the scaffolding on which he worked and he was hit by falling timbers.

“These people all came together to create this Minnesota treasure,” said Katie Ihrke. “But they have remained nameless. We are here to right that wrong.”

Hansen and some of the students’ parents accompanied the group to Thursday’s hearing. They said the group represented some 90 students who have been involved in the petition drive.

Construction began on the Capitol in 1896 and was completed in 1907. The building currently is undergoing a massive renovation and is closed to lawmakers and the public. Rep. Michael Nelson, DFL-Brooklyn Park, a union carpenter, asked whether the plaque might also recognize those involved in the current work.

Rep. John Petersburg, R-Waseca, the bill’s author, said details of the memorial are yet to be set. The legislation calls for a contest among Minnesota 6th graders to suggest design and content. The plaque would then need to meet the approval of the Capitol Area Preservation Board.

The students were excited and a bit nervous to be speaking in front of lawmakers and several television cameras covering the hearing. Legislators praised them for taking part in a real-life civics lesson.

“This has been a great experience,” Dominic told them. “I am glad you all see that a memorial is very well-deserved.”

The bill now goes to the House Committee on State Government Finance, where the money needed to create and install a plaque would be determined and appropriated. Companion legislation has been introduced in the state Senate.

Petersburg said he hoped both measures would pass this session and be signed by Governor Dayton, allowing the memorial to go up early in 2017 when the Capitol re-opens to visitors. Tens of thousands of people, many of them schoolchildren, tour the building every year.