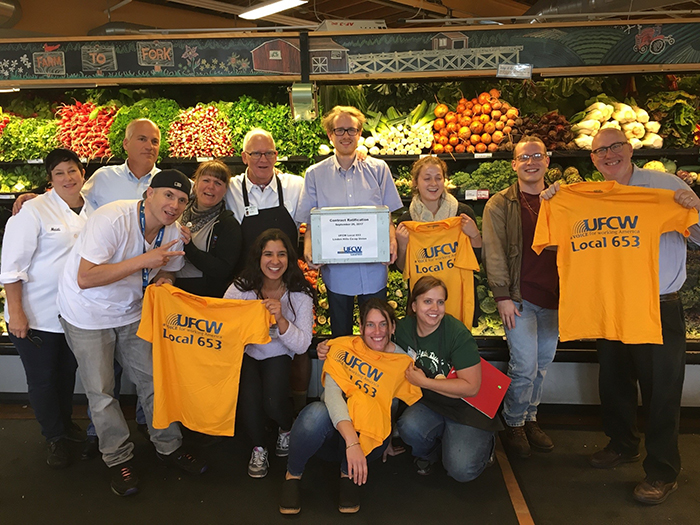 Linden Hills Co-op workers in Minneapolis, who are members of UFCW Local 653, ratified their first union contract on Sept. 26. The three-year contract, which began on October 1, includes raises for all employees and paid time off. An overwhelming majority – 85 percent – of Linden Hills Co-op workers voted to join UFCW Local 653 in February of this year.

“By standing together and voting to approve this contract, we’ve improved our lives and jobs. We chose to do this because we’re committed to strengthening our co-op and community because no one deserves to be left behind or struggle alone,” said Evan Adams-Hanson, a front end floor coordinator.

“What we fought for and now have is so real and important to building the better lives we’ve earned and deserve. Our amazing co-op has become even more amazing because we’ll now be able to better serve our community and take care of our families,” said Tracie Lemberg, who works in health and body care.

“As a working parent, having a reasonable and flexible schedule that allows me to spend time with my kids is critical. Thanks to our new union contract, I won’t be penalized for taking time off to attend parent-teacher conferences or caring for my kids when they get sick,” said Heidi Souza, who works in the deli department

“Co-op values are union values, so we feel this contract will only make Linden Hills Co-op and the local community stronger,” said UFCW Local 653 President Matt Utecht. “I am inspired by the Linden Hills workers’ courage to stand up. Our union family is proud to help everyone at Linden Hills improve their workplace and raise standards for all retail workers in Minnesota.”