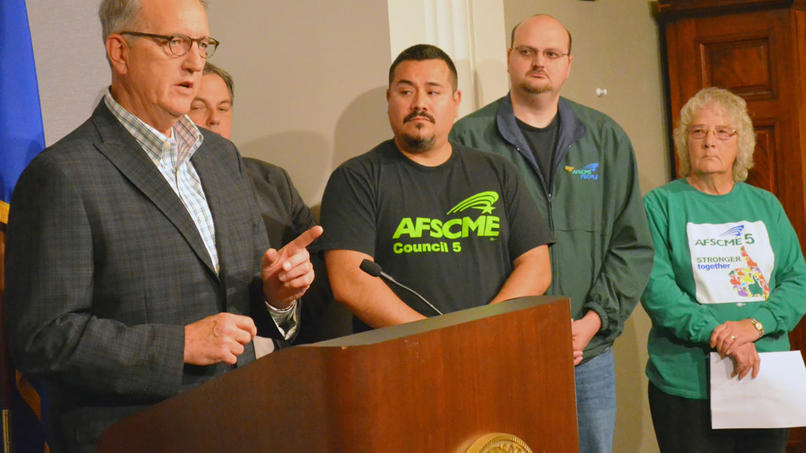 With only a week to go in the 2016 legislative session, union leaders are urging lawmakers to get serious about passage of a bonding bill to fund important infrastructure projects.

“The clock is ticking,” noted Seide. “It’s time for less partisanship and more productivity from Speaker [Kurt] Daudt and the House Republicans.”

“Get something done!” urged Melander, noting that Minnesotans have an expectation that the state’s infrastructure – from roads to schools – be properly maintained.

“The need is critical and interest rates are historically low,” said McCarthy. “Passing a bonding bill this year is common sense.”

The Republican-controlled House has yet to propose a bonding bill.

A bonding bill is one of several issues yet to be addressed in the 2016 session. Another is transportation. For years, labor, business and community leaders have been pressing for more investment, yet no action has been taken.

“We support a transportation bill … with new and sustained funding for roads, bridges and transit,” said McCarthy.

By law, the Legislature must adjourn on Monday, May 23. According to Session Daily, a publication of the Legislature, “Legislative leaders have indicated transportation needs to be addressed before other issues can be resolved.”

Time for Republicans to stop playing politics with jobs & infrastructure

The Minnesota Senate, yesterday, fell one Republican vote short of passing a $1.5 billion statewide jobs and infrastructure bill. In this unprecedented move, 20 Senate Republicans voted against legislation that would have created more than 39,000 jobs statewide and steered millions of dollars in infrastructure projects to the districts they represent.