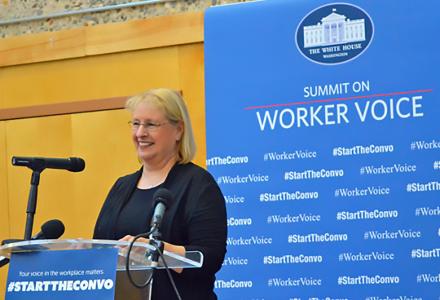 When President Obama called a Worker Voice Summit at the White House last October, he pledged his administration would hold regional summits across the country in 2016 to continue the conversation about common issues working people face on the job.

Minnesota is “ground zero,” Perez said, for successful and innovative strategies that serve as a model for workers looking to gain a meaningful voice on the job.

Perez pointed to faculty at the University of Minnesota who will vote soon on forming a union, retail janitors who won a historic agreement with Target to improve standards in their industry and SuperAmerica workers organizing outside the margins of a traditional union drive.

“Workers need a seat at the table,” Perez said. “We need to build bigger tables rather than taller fences in this country.”

Since Obama took office at the height the Great Recession, his administration has shepherded a recovery that’s succeeded on many fronts. The unemployment rate recently dipped below 5 percent, and the auto industry has come “roaring back,” Perez noted.

But wage growth has been sluggish, and while the economic recovery succeeded in creating new jobs, many lack traditional, full-time schedules and benefits like paid sick time and family leave.

The Worker Voice Summit, Perez said, is an effort to tackle the “unfinished business of ensuring this wind that is at our back results in prosperity for everyone, not just for a few people at the top.”

To do that, summit organizers are lifting up best practices for organizing workers in the new economy, and a panel discussion held after Perez’s keynote speech today highlighted several local success stories.

Tara Lee Johnson, a SuperAmerica co-manager from St. Cloud, talked about her leadership in putting pressure on the convenience-store chain to improve its hiring practices and working conditions. High turnover rates make it difficult to organize a traditional union, she said, but with support from two union-backed community outreach initiatives, Working America and the Greater Minnesota Worker Center, workers won a meeting with the company’s president to discuss their concerns.

“They’ve given us a voice,” Johnson said of Working America and the worker center. “They’ve educated us about our rights.”

Target janitor Maricela Flores, a member of the Twin Cities-based worker center CTUL, appeared on the panel with a corporate vice president. They recounted the series of meetings that led to agreement on a Responsible Contractor Policy that stipulates scheduling and safety requirements Target’s cleaning contractors must meet – and provides workers with a pathway to collective bargaining.

Flores said she hopes other retailers follow Target’s example and take a collaborative – rather than adversarial – approach to dealing with workers’ concerns. She noted that CTUL members who clean Macy’s stores in the metro plan to strike Feb. 18 unless the company agrees to a meaningful dialogue about working conditions.

“Each and every one of us are human beings, and we deserve respect,” she said. “We deserve to have a voice on the job.”

“We’re proud of our state and proud of our town,” Ellison said. “But we’ve got to do something, and conversations like this are part of the solution.”