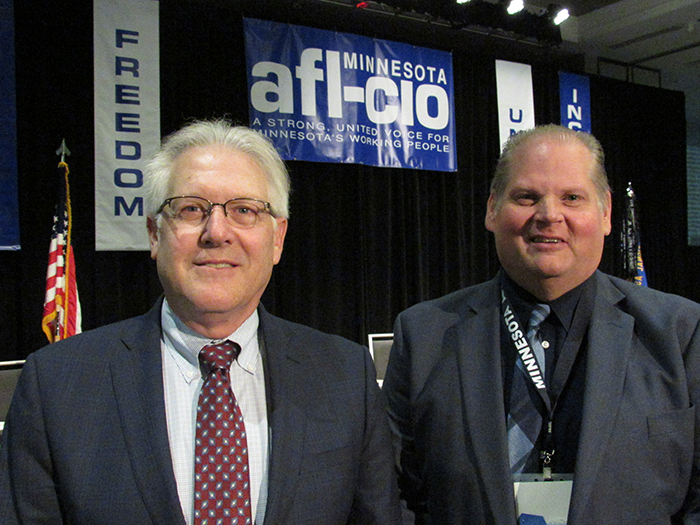 “Despite setbacks from narrowly decided Supreme Court decisions, working Minnesotans are rising up and joining together in unions in numbers we haven’t seen in years,” said McCarthy, who was first elected state federation president in 2015. “I’m honored to continue leading the Minnesota AFL-CIO and supporting the working people of our affiliate unions’ efforts to earn a fair return on their work.”

McCarthy began his work in the labor movement when he joined Hotel Employees & Restaurant Employees (now known as UNITE HERE) Local 17 in 1985. He became a business representative and then was elected president of the local. In 2002, he was elected president of the Minneapolis Regional Labor Federation, a position he held until his election to lead the Minnesota AFL-CIO. In addition to his duties at the Minnesota AFL-CIO, McCarthy serves on the Minnesota Sports Facilities Authority, Governor’s Workforce Development Board, and Minnesota Workers’ Compensation Advisory Board.

During McCarthy’s time as Minnesota AFL-CIO president, the state’s union membership has grown by more than 48,000 workers. Facing the most consequential election in a generation for working Minnesotans, McCarthy is leading the Minnesota AFL-CIO in its largest and most sophisticated member to member political program in history.

Lehto was first elected Secretary-Treasurer in July. A native of Minnesota’s Iron Range and member of the International Association of Machinists and Aerospace Workers (IAM) Local Lodge 459, Lehto served in a variety of roles for the state federation for 18 years including Chief of Staff and Legislative Director.

During his time at the Minnesota AFL-CIO, Lehto worked has worked with all unions – public and private sector, building trades, service, and industrial – along faith groups and non-profit organizations to protect and improve the lives of working people.

“This is a critical time for working Minnesotans and I am honored by the trust the delegates have placed in both Bill and I,” said Lehto. “The labor movement’s best days are still ahead of us and I am excited about what we can accomplish in the coming months and years.”