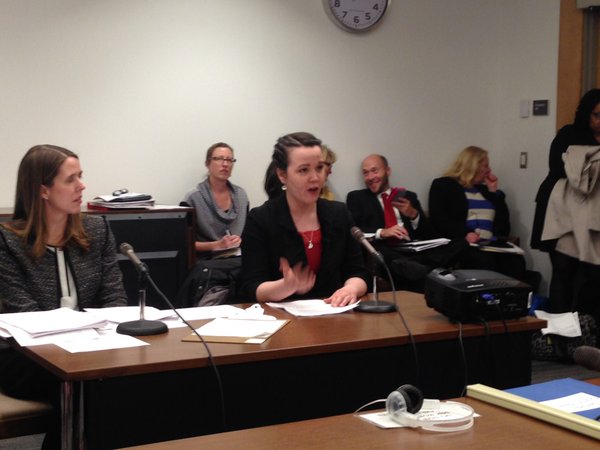 The proposal, authored by state Senator Katie Sieben, DFL-Newport, presents a clear choice: Should all people be able to take paid time off when they face serious illness or to care for a loved one or welcome a new child? Or is that right reserved only for those employed by companies that choose to offer that benefit?

Sieben’s bill sets up a system, similar to unemployment compensation, with a state-administered fund to pay workers up to 80 percent of their wages for a leave that lasts up to 12 weeks. The program is not for the occasional sick day, but rather mirrors the federal Family & Medical Leave Act, which provides up to 12 weeks of unpaid leave to workers for birth, adoption and serious health conditions facing them or a family member.

A payroll tax of $1.70 per week on both employers and employees would fund the leave benefit.

The Senate Committee on State and Local Government approved the bill on a voice vote, sending it to the Judiciary Committee. No hearing is scheduled yet in the Minnesota House.

Sieben’s bill is based on research done by Deb Fitzpatrick, director of the Center on Women, Gender and Public Policy in the Humphrey School of Public Affairs at the University of Minnesota. Download a PDF file of her report here.

Fitzpatrick found that, “While almost three-quarters of Minnesota workers receive at least some pay when they were out of work for family or medical reasons, access to pay during leave is unequally distributed. Currently more than a quarter of all family and medical leaves in Minnesota are without any compensation during leave.”

The Sieben plan is modeled in part on successful, statewide paid family and medical leave programs in California, New Jersey and Rhode Island.

Two workers and a small business owner said the legislation is sorely needed.

Stephanie Darrow, representing Gandhi Mahal restaurant and the Main Street Alliance of Minnesota, said the Sieben plan would make it possible for small businesses to afford to offer paid family and medical benefits to their employees. She also read a letter from Eureka Recycling, which endorsed the proposal.

Lonnie Duberstein, a retired teacher, said he and his sister, Lynn, spent weeks caring for their father and stepfather before their deaths. Lynn, who did not have paid leave, juggled two jobs and combatted exhaustion, Duberstein said.

“The value of a family’s continuing support and presence during a loved one’s last days cannot be measured,” he said.

Ron Harris remembered his mother being fired from her job when she took time off to care for him during an extended illness. He said too many workers risk losing their jobs if they care for their children – and that needs to change.

“We collectively have the ability to make this [change] happen,” Harris said. “We all stand to benefit from this effort.”

The 2,300-member Minnesota Chamber of Commerce and the Minnesota Business Partnership, which represents many of the state’s largest corporations, raised objections.

Chamber lobbyist Cam Winton called the legislation “well-intentioned” but said his group “has serious reservations,” adding, “This [proposal] is a mandate and this is a tax.”

Business Partnership lobbyist Jill Larson said many of her group’s members already offer paid family and medical leave to employees and are concerned about the program’s costs and administrative requirements.

Committee Chair Patricia Torres Ray, DFL-Minneapolis, encouraged the business groups to provide “more concrete evidence” to back up their concerns as the legislation moves forward.

Today, Minnesotans for Paid Family Leave, a statewide coalition of working families, faith communities, labor and nonprofit organizations, showed their support for the 2016 Paid Family and Medical Leave Act, legislation creating an insurance program to provide all Minnesota workers with a portion of their pay for up to 12 weeks for pregnancy and medical issues and 12 weeks for bonding with a ne