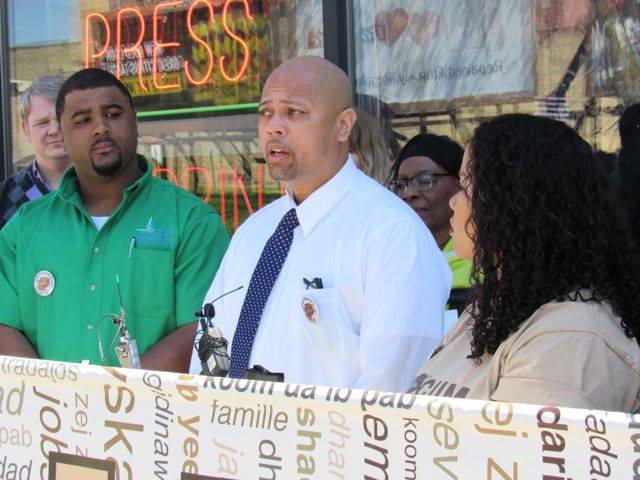 MINNEAPOLIS - As the Minneapolis City Council considers an ordinance mandating employers provide paid earned safe and sick time, a group of union members wants lawmakers to remember that the issue is particularly significant for people of color.

People of Color Union Members, known as POCUM, convened a news conference Tuesday on Hennepin Avenue featuring workers, labor leaders and a local businessman. Speakers pointed out the fact that people of color are more likely than white workers to lack access to paid sick time to care for themselves or family members.

Tuesday’s event was another example of the growing visibility of POCUM, a grass roots group that is pressing the labor movement to act to create racial and social justice in the community – and in unions themselves.

POCUM was formed in February 2014 through the efforts of the Minneapolis Regional Labor Federation and its community and education organizer, KerryJo Felder, who was hired in part to mobilize union members of color.

The group “just took off” and has been meeting regularly ever since, Felder said. It has no formal structure and is made up of mostly rank-and-file workers. At a recent POCUM meeting, those participating included members of AFSCME; Education Minnesota; the Elevator Constructors; International Brotherhood of Electrical Workers; Letter Carriers; and Teamsters, among others.

Members are a mix of veteran workers – some retired – and younger union members.

Teferi Fufa, retired after 24 years as a Minneapolis teacher, said the formation of POCUM was long overdue.

“For several years, I was the only black person on my union’s executive board,” he said. “I felt invisible.” By banding together through POCUM, union members of color can work together to advance a common agenda, he said.

POCUM did that last fall when it invited the national AFL-CIO’s Labor Commission on Racial and Economic Justice to come to Minneapolis in February. The commission held hearings in six cities and heard from more than 600 union and community members.

While discussions at all the hearings touched on broad concerns such as police-community relations, mass incarceration and economic inequality, the dialogue in Minneapolis was most pointedly about the need for unions to have people of color in leadership roles.

“We love our unions but we want our unions to love us back,” POCUM member Cathy Jones, a member of Branch 9 of the National Association of Letter Carriers, told the Minneapolis Labor Review newspaper.

“We want them to recognize our God-given talents and abilities. We want to be part of the next generation of leadership that’s going to save the labor movement.”

In addition to their activism with POCUM, Jones and Felder are both leaders in the Minneapolis NAACP(link is external) – Jones as 2nd vice president and Felder as secretary. Two other union members – Helen Bassett of MAPE and Bertha Daniels of the Minneapolis Federation of Teachers – also are NAACP officers.

While they are frustrated by the fact that people of color are under-represented in the top ranks of their unions, POCUM members view the labor movement as an important path to prosperity for African-Americans, Latinos and other workers of color.

With the help of the University of Minnesota Labor Education Service(link is external), POCUM produced a video in which members explain the benefits of union membership. [See video in gallery next to this article.] They cite employment opportunities, better wages and benefits and having a voice on the job, among others.

POCUM plans to show the video to high school students to encourage them to consider careers in fields such as construction, transit and government service.

The video also draws connections between the labor and civil rights movements.

“One of the people I looked up to the most is Martin Luther King – and he was pro-union,” Kenneth Garnier, a member of AFSCME Local 34, says in the video. “In fact, he was supporting the sanitation workers down in Memphis, Tennessee, in 1968 when he was assassinated.”

Recruiting young people into union-organized jobs is part of a larger strategy to move young people up in the labor movement, Jones said. “It’s important to step back and push up new leaders.”

POCUM is encouraging younger workers like Marie Dino, an organizer for AFSCME Local 3800, the clerical workers union at the University of Minnesota, to step up. She said it’s time for change.

“There are more young workers than ever – and people of color are going to be way forward” for unions, she said.

Workers of color who are interested in more information on POCUM may contact Kerry Felder at the Minneapolis Regional Labor Federation, 612-379-4206, or by e-mail.

Nurses and hospital workers today added their voices to the call for guaranteed access to earned sick and safe time for all workers, urging members of the Minneapolis City Council to take up a robust citywide ordinance when they meet Thursday.

Local union members of color delivered a strong message to the visiting Labor Commission on Racial and Economic Justice: Hear us. Help us. Include us. To ensure a future for the labor movement, support us on a path to leadership.